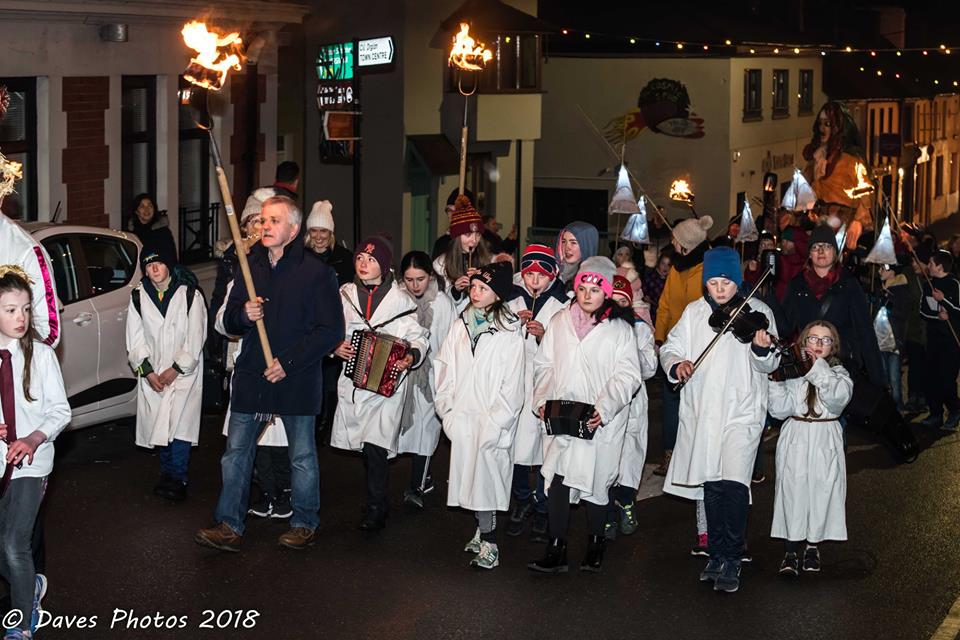 The Cooleanaig Biddy was a mighty success,

For the contest in Milltown, they surely did dress.

‘Twas a night of excitement preparing to go,

For the time was expiring and the dressing was slow.

When they arrived in Milltown, with no time to spare,

And quickly fell into a line at the Square;

They knew it was time to be on their way;

They marched to the Hall and made no delay.

They arrived at the door, all arranged single file,

And marched round the Hall in military style;

With a flag out in front and a light at the rear,

A signal for danger … ‘Cooleanaig is here!’ …

Gobnait and the Biddys … the lore of the Biddy, a folk tradition embedded in Kilgobnet, Cill Ghobnait in the old Parish of Tuogh/Beaufort for centuries and indigenous to this part of the Kingdom of Kerry. As many as twelve Biddy Groups kept the tradition alive in the Parish of Tuogh throughout the years … Kilgobnet, Coolcummisk, Alohart, Dunloe, Black Valley, Shannera, Carnahone, Meanus, Cooleanaig, Glencuttane and the outlying Killorglin, Ceannouvree and Glencar. The Biddy was a celebration of the Celtic Imbolc, February 1st … a vernal feast attributed to the sowing of the crops and more especially … ‘cows and bees in the land of milk and honey’. They would travel the byroads, from house to house, often in inclement weather while dressed in white uniforms, sashes and ornate oaten-straw hats. This was done under the strict supervision of their Captain, who carried an effigy of Brighid represented by a straw-doll called a Brideóg. Certain protocols were adhered to … firstly as the approached a house the captain would call out ‘Any objection to the Biddy?’ … to which the reply was …  ‘The Biddy is welcome here in this house’. They would the in single file, march into the house to the strains of the ‘Dawning of the Day’. The Biddys would dance sets and polkas round the floor bringing merriment to these quiet, humble country kitchens. They were welcomed into the homesteads, feasted on bairín breac and tradition has it, pins were stuck on to the Brideóg in thanksgiving, good luck for the forthcoming year. Bridget’s Crosses made of rushes were made usually on the eve of Imbolc and put underneath the thatch to protect the house for the year, especially from lightning. The traditional Biddy-Ball was the culmination of the Imbolc festivities where the participating Biddys held a celebration of their own. In later times the Biddy Ball was held in parish halls with great celebration and some friendly rivalry. Milltown Biddy Ball was a very prestigious affair with all these participating groups and prizes were awarded for the best well turned Biddy.

‘Biddys Day’ is an annual event in Killorglin in early February and is going strength to strength for the last three years. ‘Biddys Day’, a concept bringing this rich Spring/Imbolc tradition which was in the throes of dying out. The parade, upwards of ten Biddy groups start from the Fishery, over Laune Bridge, up onto Cnocán na gCeap to the CYMS where the participating groups showcase there performances of singing and dancing to a large audience. Throughout that day, the CYMS is the venue consisting of related Biddy crafts of crosses and hats, with the invitation to make your own.

The Dreamtime … winter pregnant with spring, cusp of Imbolc … she spun sunbeams, making gold cloth from their threads … nicks cut on Ogham inscribed … BRÍD … the exhalted one of learning, poetry and fertility of the raw earth … hanging her cloak, brat Bríd on a shaft of sunlight seeping through the four corners and the land undulating forming hills and glens … the Lands of the Tribe of Tuath. Bríd summon her pollinators …  dordánaí  intoning a hive of honeyed sound …

… her emissiary, Gobnait Nechtáin, Smithy bringing Fire to the Tribe …  instilled into Dreamtime. Gobnait was mined of molten ore at the earth’s centre … sharp-mouthed, máthair tine, source of raking and smooring of the fire … coigilt an tine. Bó Fionn gave of her milk freely under bile tree of the tortan ash grove near spideóg river … Leaba na Bó with the ever-flowing Cauldron.  Horses of the plough from Ballyledder … Chestnut Mare, Black Stallion, White Mare and Pieball … corr ghobach of the grove fid nemidh … ‘reddening the earth’ for three days in the shape of a latticed … Crosóg Bhríd …  the sacred three … to save, to shield to surround the hearth, the house, the household … this eve, this night, Oh! this eve … this night, every night and each single night … Amen.

‘Kerry Dreamtime’ … Legends and Lore of the Magillicuddy Reeks (2019) 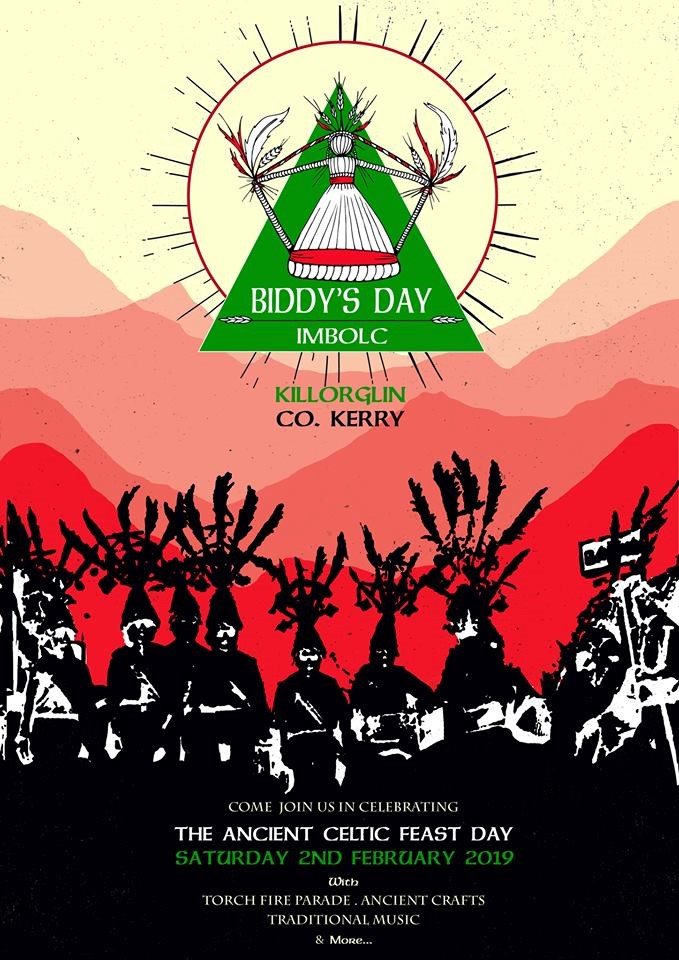 The ancient tradition of “The Biddy” has enjoyed a huge resurgence in recent years, with Biddy's Day groups. At one point, there were only two of in the entire county - now there are 15 or more. Sometimes compared to the Wren Boys or the Straw Boys, Biddy's Day has its roots deep in both the old Celtic tradition of Imbolc and Christianity's St Bridgid. Biddy's Day is most associated with Mid - Kerry and the Kilgobnet area in particular, where the festival and its traditions were kept alive for many years even while the tradition died out elsewhere.

The Biddy is honoured each year in the region when Biddy groups visit rural houses and pubs in the area, carrying a Brídeóg with them as they go, ensuring that all evil spirits are kept away for the coming years. A visit from the Biddy guaranteed good luck, fertility, and prosperity.

The Killorglin Biddy group has organised a festival to revive and celebrate the ancient tradition and found a ready enthusiasm among local groups. The torchlight parade with the street theatre and huge floats makes an exciting spectacle and breathes new life into the Biddy. All groups parade through the town and converge on the town hall for a performance of song, music and dance. It’s great fun and a great community get-together.

This year our Comhaltas branch in Milltown-Listry accepted an invitation to take part. All were overwhelmed by the quality of the traditional straw costumes and craftwork that went into preparing each group.

The parade and gathering in the town hall was a great experience for the young musicians who took part, most of whom had never heard of the Biddy tradition. All are now already thinking about next year and ideas for costume and craft workshops are being discussed!