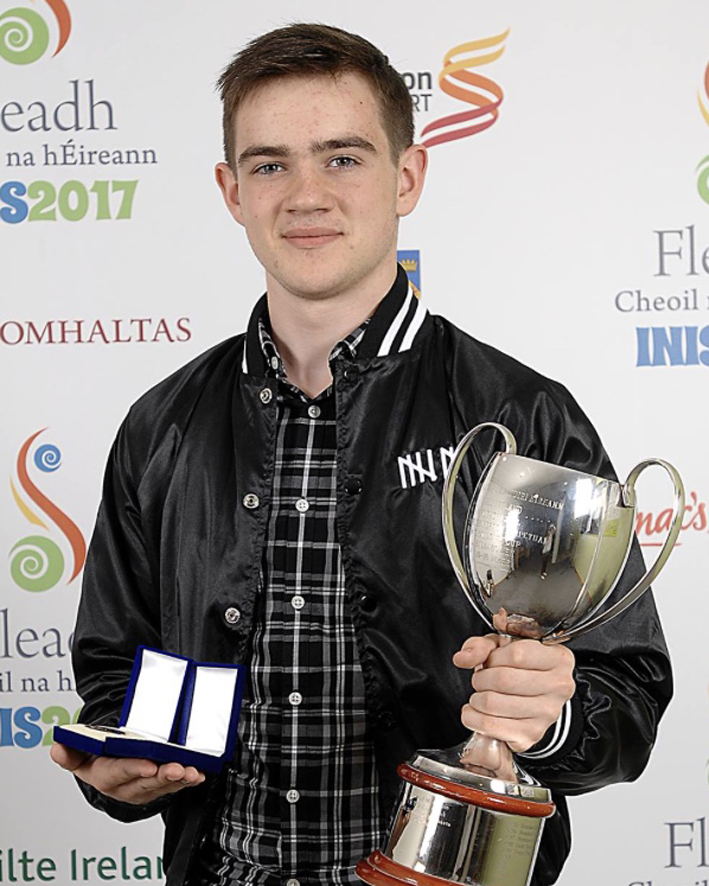 How Comhaltas Ceoltóirí Éireann has been a big part of my life by Máirtín Ó Cathasaigh.

I have been a member of Comhaltas from a very young age. All my siblings would have taken part in the Fleadhanna before me, and since I am the youngest in the family, it rubbed off on me too. I play several instruments and have numerous All Ireland medals for traditional and Sean-nÓs singing, music, scéalaíocht lilting and céilí dancing. At the All Ireland Fleadh in Drogheda in 2018, I took 1st place in English Singing, 1st place in Scéalaíocht, 2nd in Amhránaíocht and 3rd in Lilting under 18. In 2017, I managed to take to the stage with my teammates in the 8 hand céilí which we won, just 2 weeks after getting my appendix out, however I had to be replaced for the 4 hand.

I was presented with a Micheál Ó hEidhin medal for achieving distinction in Grade 8 tin whistle in the SCT exams and received the individual champion trophy for my achievements in Fleadh Cheoil na Mumhan last year.

I am a member of Craobh an Ághasaigh branch in Dingle since 2005 and have performed both locally and nationally with the branch as well as on broadcasts with local and national radio stations on behalf of Comhaltas. In 2017 I was selected to be part of the Macalla na hÉireann Comhaltas concert tour of Ireland as a dancer, musician and singer. As a Kerry man, it was a great honour for me to be selected, not just for my branch but also for my county. I love singing, dancing and playing music and I have made so many friends from all parts of the world down through the years, especially during Scoil Éigse which I never failed to attend.

Fleadh time is my favourite time of year, as it is a chance for me to catch up with some friends that I only meet at Fleadhanna. As well as that, I love competing and am no stranger to the stage so there is no need for me to be nervous. I simply just take in the amazing atmosphere and enjoy myself every time, which is what makes Fleadhanna so great.

I am also a member for Siamsa Tíre the National Folk Theatre of Ireland and have taken part in shows run by the Oliver Hurley School of Musical Theatre, Tralele Musical Society and the Light Opera Society of Tralee. I compete in Oireachtas na Samhna every year as well as having competed in Scór na bPáistí, Scór na nÓg and Scór Sinsear, in which I have been quite successful. Next year, I hope to study music in college.

I love being part of Comhaltas Ceoltóirí Éireann and am very greatful to my family, teachers, branch and Kerry Comhaltas for their endless support and dedication down through the years. In the future, I hope to make them all proud of me in my musical journey.