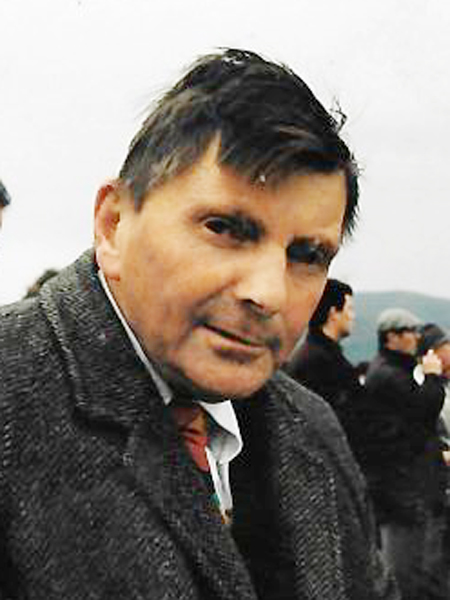 The one and only Leo Griffin passed to his eternal reward at Kerry General Hospital in Tralee at 3.45p.m on Friday 6th November 2015 surrounded by his family and close friends.  Born in 1940 to John and Catherine Griffin in Ballymullen,the family - comprising his two sisters, Cora and Terry, and his brother Michael - subsequently moved to Kevin Barry Villas. After attending Edward St. CBS, he worked in Callaghan’s leather shop in Lower Castle St., where he proved a very popular staff member. In later years he was a familiar figure on the Mall fundraising for Kerry General Hospital. Later in the year, he could be found in his usual spot selling tickets for Kerry GAA County Board’s annual car raffle.

Leo’s great love for Gaelic Football was only matched by his lifelong passion for traditional music and singing. Where ever in Kerry the Fleadh Cheoil convened Leo would be present, likewise the Munster and All-Ireland Fleadh. Nor did not confine his presence at Fleadha in Ireland; for the past six years he attended the annual Congress of North American Comhaltas at Parsippany, Washington D.C.; San Antonio and St. Louis. Before his unexpected death, Leo had already booked his flight to next year’s U.S. Congress. Above all, Leo was faithful to his friends, past and present. Thar aon rud eile, d’fhéadfaí brath ar Leo beart de réir a bhriathar a dhéanamh i gcónaí. Ní loicfeadh Leo ort riamh. Dámbeadh airgead le bailiú ag doras comórtais, ticéid le díol timpeall an bhaile, nó scéal le scaipeadh faoi chruinniú, dhéanfadh Leo a chúram go mion agus go cúramach.

Gael dílis ab ea Leo. Loyalty was yet another of Leo’s many virtues. He was loyal to everything Irish. His loyalty to CCÉ and the GAA are well-known but though not a fluent Irish speaker he supported all Conradh na Gaeilge’s functions in Tralee and beyond. He presented a splendid trophy to Feis Chiarraí for the Sean-Nós singing competition. Nor did he never miss ‘Aifreann Gaeilge a’naoi’ unless Kerry needed his support in Páirc an Corcaígh. For many years Leo had a standing order for five Christmas wreaths which he quietly placed on the graves of former friends. St. John Church, Tralee was packed to the doors on the morning of Leo’s funeral Mass. Politicians, stars of the GAA world, CCÉ   personalities, his neighbours and friends from far and near all came to say a final goodbye and pay tribute.  Young CCÉ musicians paid tribute to Leo in the music that he loved. Tá Leo imithe uainn ar shlí na fírinne ach mairfidh a chuimhne i measc chairde agus a lucht aitheantais i dTrá Lí agus i gCiarraí agus níos faide ó bhaile nuair a bhuailfear caid agus seinntear ceol.