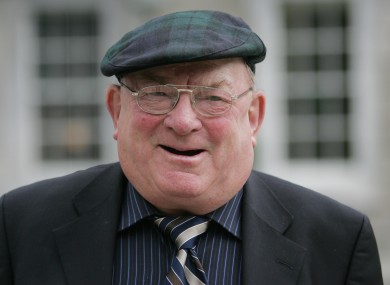 Champion of the Ordinary People

That great and popular character Jackie Healy Rae T.D. has departed the scene which he graced with distinction, as a diligent worker involved in every facet of people’s lives, for close on fifty years. He ran a very successful business in Kilgarvan and gave freely of his time to the G.A.A. He played hurling with his local team. He also loved music, played accordion and saxophone and joined Comhaltas Ceoltóirí Éireann to help promote and popularise our great traditional Irish music.

He became Chairman of Comhaltas in Kerry, a position he held for many years.

My wife Treasa was County Secretary at the time, a position she held for 40 years.

I was also a member in Kerry and beyond. During his chairmanship he ran successfully 3 Kerry Fleadhanna and a Munster Fleadh in his home branch of Kilgarvan.

What a colourful jovial man he was!

Board meetings he chaired were a joy to attend. When a contentious motion was up for discussion and a member kept waffling on, Jackie unerringly read the mood of the members, shouted “rejected” or “passed”, raised his arm, shouted “unanimous” and proceeded briskly to the next item on the agenda! Meetings started punctually and always ended on time to satiate anybody’s thirst for a pint.

Jackie had other irons in the fire.

He was a staunch member of Fianna Fáil and was their director of Elections in the South Kerry Constituency for 30 years.

He was so successful in that job that Charlie Haughey paid special tribute to his work for Fianna Fáil. Having rendered such loyal service he confidently felt his opportunity had come to have a cut at having T.D. appended to his name.

But to his dismay the Fianna Fáil convention refused to oblige.

Deeply disappointed and incensed, Jackie was far from finished. He knew from experience that the best form of defence was attack. He entered the Election as an Independent candidate. From his years of experience he had little to learn.

Did he succeed? Did he what! He headed the poll and left those of little faith in Fianna Fáil tearing their hair out.

As luck should have it, Jackie was now the most powerful member in Dáil Éireann as the Fianna Fáil led government under Bertie Ahern needed his vote for a safe majority in Dáil votes.

The wheel had turned full circle and he was now in a position to strike a bargain and demand the monies he had always hoped for to help improve the lot of the ordinary underprivileged people of South Kerry, the “people who ate their dinner in the middle of the day”. These people had great confidence in Jackie.

He was a straight forward, honest, truthful gentleman with no airs or graces, who did his level best for his people. The monies he successfully extracted from the national purse were spent to rectify the numerous essential services which were grossly neglected in the constituency for years.

The ordinary people would no longer be second class citizens on their native heath.

As his son Michael said in his address at his funeral mass, “travel around Kerry if you wish to see the result of his labours”.

His passing has left a massive loss and void in our lives which will be very difficult to fill.

His family can take some solace from the magnificent show of respect and honour given him from people of all walks of life who flocked from far and near to pay homage to a great servant of the ordinary people. The memory of the massive crowds attending the final obsequies and solemnities at his home, church and cemetery, will remain with us for years.

We will never forget you Jackie.

You deserve to be fondly remembered by young and old in South Kerry.

When he met God at the Pearly Gates it doesn’t take a genius to guess the tete-a-tete between them. It went as follows:-

God: “Well done thou good and faithful servant, come, enter my Kingdom and take possession of the special front bench seat reserved for you.”

Jackie: “Thank you very much My Lord God for your kind and generous welcome but don’t forget Lord, to canvas and vote for my son Michael at the next general election”.

Jackie often said to me that he’d love to be able to converse in Irish with me. But when I reminded him that he was taught Irish at school, his instant reply was, “Yerra, Jasus Breanndán, I was too stupid” – the understatement of the century.

Let me add the following in deference to his wishes.